Each of us has surely met with the problems connected with the deficiency of the chimney. And just these problems and deficiency help to solve chimney caps.

You surely know, which problems can be caused by the chimney with insufficient draft. How can this problem  spoil by the smoking into the room nice atmosphere in the family ring. The smoke is spread into the other rooms and  spoils the atmosphere for the rest of the day. And this are only direct, visible and mainly smellable results of insufficiant draft in chimney.

Other and much more serious problem is production and subsequent spreading of toxic substances created during insufficiant combustion. Important fact is also consumption of fuel during the burning. The fuel burns imperfect, burn through  not enought and flame often go out. It cause that the fuel consumption increase.

Chimney caps are unique  economicaly and ecologicaly not demanding solution. Solution, which solves all the imperfection of your chimney, without interference into its inner construction. 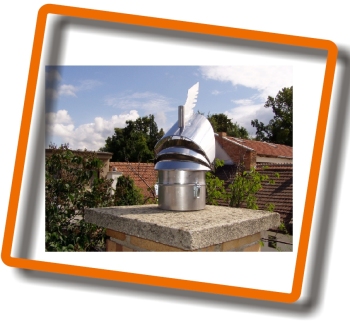 Chimney caps help to your chimney to :

Attractive chimney caps DRAGON is placed on mouth of boilers and fireplaces for wood and solid fules. Dragon caps is unique in its design and placing of bearings on which rotate. Thanks to its original construction are  the caps turned facing the wind. Flowing wind creates in the chimney underpreassure and fluently draw-off the fumes. This caps has extremely hight resistence to chimney fumes influence and prevent to snow and rain get into the chimney venthole.

Chimney caps Dragon with the diameter of the throat 150 mm, 200 mm and 250 mm are supllied with two wings which are directly content of package with chimney caps. The customer oneself can choose which from the two original design will bring his chimney better appearance! 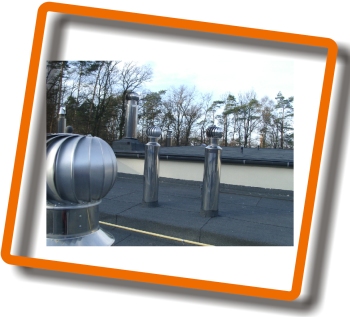 Rotary chimney caps Turbowent are used at insufficient draught in chimney on gaseous fuels. Flowing wind on the roof or rising warm air spins  the cups and fluently takes the fumes out of the chimney. Turbowent prevent to snow and rain get into chimney venthole and in this way demage it.

The cup is used into the environment, where is the maximum  temperature 150 °C. 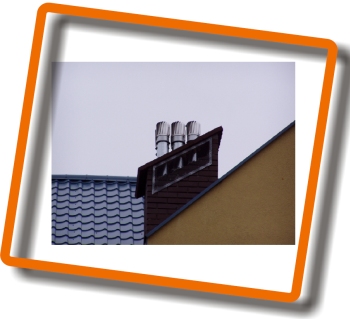 Rotary chimney caps Tulipan is device, which use the power of wind to increase the chimney draft. Regardless the direction, power and type of wind is the cups rotating still in the same direction and creates the under preassure in the chimney. It increases the intensity of the flowing in the chimney and prevent creating of reverse draft. The main advantage of Tulipan caps is in possibility of placement  for the chimneys which are in row where are the mouths close to each other. Chimney caps Tulipan is possible to use for the chimneys for gaseous fumes.

The cap is used for surroundings to maximal temperature 150°C.

All the items from the range of chimney cups and chimney cowls are on stock.

The warantty For Chimney cups and cowls is 2 years.

Bellow the Photo Gallery is a database of useful links.